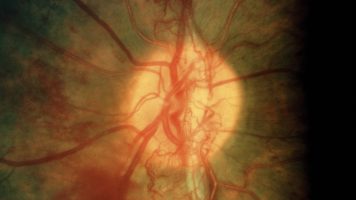 Though many reported feeling better on Dr. Walter Kempner’s rice and fruit diet, he refused to accept such anecdotal evidence as proof of success. He wanted objective measurements. The most famous were his “eyegrounds photographs,” taken with a special camera that allowed one to visualize the back of the eye. In doing so, he proved diet can arrest the bleeding, oozing, and swelling you see in the back of the eye in people with severe kidney, hypertensive, or heart disease. Even more than that, he proved that diet could actually reverse it, something never thought possible.

In my video, Can Diabetic Retinopathy Be Reversed?, you can see before and after images of the back of patients’ eyes. He found reversal to such a degree that even those who could no longer distinguish large objects were able to once again read fine print. Dr. Kempner had shown a reversal of blindness with diet.

The results were so dramatic that the head of the department of ophthalmology at Duke, where Kempner worked, was questioned as to whether they were somehow faked. He assured them they were not. In fact, he wrote in one person’s chart, “This patient’s eyegrounds are improved to an unbelievable degree.” Not only had he never seen anything like it, he couldn’t remember ever seeing a patient with such advanced disease even being alive 15 months later.

The magnitude of the improvements Kempner got—reversal of end-stage heart and kidney failure—was surprising, simply beyond belief. But as Kempner said as his closing sentence of a presentation before the American College of Physicians, “The important result is not that the change in the course of the disease has been achieved by the rice diet but that the course of the disease can be changed.”

Now that we have high blood pressure drugs, we see less hypertensive retinopathy, but we still see a lot of diabetic retinopathy, now the leading cause of blindness in American adults. Even with intensive diabetes treatment—at least three insulin injections a day with the best modern technology has to offer—the best we can offer is usually just a slowing of the progression of the disease.

So, in the 21st century, we slow down your blindness. Yet a half century ago, Kempner proved we could reverse it. Kempner started out using his plant-based rice diet ultra-low in sodium, fat, cholesterol, and protein to reverse kidney and heart failure; he actually assumed the diet would make diabetes worse. He expected a 90% carbohydrate diet would increase insulin requirements; however, the opposite proved to be true. He took the next 100 patients with diabetes who walked through his door who went on the rice diet for at least three months and found their fasting blood sugars dropped despite a drop in the insulin they were taking. What really blew people away was this: Forty-four of the patients had diabetic retinopathy, and, in 30% of the cases, their eyes improved. That’s not supposed to happen; diabetic retinopathy had been considered “a sign of irreversible destruction.” What does this change mean in real life? Patients went from unable to even read headlines to normal vision.

The remarkable success Dr. Kempner had reversing some of the most dreaded complications of diabetes with his rice and fruit diet was not because of weight loss. The improvements occurred even in those patients who did not lose significant weight; so, it must have been something specific about the diet. Maybe it was his total elimination of animal protein, animal fat, and cholesterol? Or perhaps it was his radical reduction in sodium, fat, and protein in general? We don’t know.

How do we treat diabetic retinopathy these days? With steroids and other drugs injected straight into the eyeball. If that doesn’t work, there’s always pan-retinal laser photocoagulation, in which laser burns are etched over nearly the entire retina. Surgeons literally burn out the back of your eye. Why would they do that? The theory is that by killing off most of the retina, the little pieces you leave behind may get more blood flow.

When I see that, along with Kempner’s work, I can’t help but feel like history has been reversed. It seems as though it should have gone like, “Can you believe 50 years ago the best we had was this barbaric, burn-out-your-socket surgery? Thank goodness we’ve since learned that through dietary means alone, we can reverse the blindness.” But instead of learning, medicine seems to have forgotten.

I documented the extraordinary Kempner story previously in Kempner Rice Diet: Whipping Us Into Shape and Drugs and the Demise of the Rice Diet. The reason I keep coming back to this is not to suggest people should go on such a diet (it is too extreme and potentially dangerous to do without strict medical supervision), but to show the power of dietary change to yield tremendous healing effects.

The best way to prevent diabetic blindness is to prevent or reverse diabetes in the first place. See, for example:

Why wouldn’t a diet of white rice make diabetes worse? See If White Rice Is Linked to Diabetes, What About China?

For more on the nitty gritty on what is the actual cause of type 2 diabetes, see:

PS: If you haven’t yet, you can subscribe to my free videos hereand watch my live, year-in-review presentations: